What is EMC? A short history lesson.

EMC is short for Electromagnetic Compatibility:

the ability of equipment or a system to function satisfactorily in its electromagnetic environment, when used as intended:

Every piece of electronic equipment we buy, whether an iPod, phone, hair dryer, kettle, TV and everything else besides, requires that faithful old "CE" mark if you want to sell it in anywhere in the European Union. There are a plethora of standards, documents, red tape and "other things" we need not concern ourselves with but which are required in order to be able to peddle your wares in Europe. The one aspect we do want to concern ourselves with, is 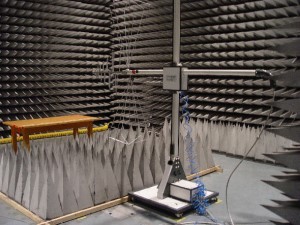 The subject of EMC first appeared in any significance in the 1950s, after the rocketing popularity of the "wireless". With stations interfering with each other both intentionally and otherwise the federal government of the USA decided that regulation was needed. Also in the 1950s, technology moved forward a stage with the deployment of the transistor and militaries everywhere began the arms race of electronic warfare.

With a host of new, powerful equipment coming into service, it soon became apparent that an unintended consequence of having some equipment in proximity to others was having a negative effect on performance. EMC was born. Moving forward a few decades to the 1980s, a sudden population explosion of a device known as the personal computer came about.

With little regard for consequence, equipment was deployed and printers, mice, keyboards and a host of peripherals all needed interconnecting cables, almost all of which radiated some form of interference. If you are under about thirty, ask your mum or dad what happened to their car radio when they drove though the High Street. The European Union sought to regain control of the interference before it became a serious threat to services which relied upon radio and thus the EMC Directive was born. Enacted in 1989 under 89/336/EEC, it took measures to ensure that unintentional interference between electrical and electronic devices would come to an end.

For those who do not understand the mechanism, simply stated, an EU Directive must be translated into the laws of the member states of the European Union. In our case in the UK, this was Statutory Instrument SI3418. More recently a new EMC Directive (2004/108/EC) has translated into the UK's Electromagnetic Compatibility Regulations 2006.

EMC Law is complex and interconnects with other legislation, for example the "wiring regs" used by electricians (BS7671) will have an EMC 'Annexe' legally applicable from 2011.

Our apologies for the history lesson but it has served to set the stage for what follows. So now you know the first bits of jargon; EMC and the EMC Directive. This is where the story begins.

For electrical and electronic products to obtain CE certification they MUST (mandatory) comply with the EMC Directive. To this end, a team of electronics experts, through a combination of calculation, experience, and trial and error, came up with limits for interference and the accepted means for making the appropriate measurements. These limits are electrical measurements for the strength of unwanted interference and come in two flavours; conducted - interference travelling along a cable; and radiated - travelling through the air as radio waves.

The limits have the acronym CISPR[i] and they have been carefully amended over time in the light of better understanding and more accurate instrumentation.

Two routes exist for CE certification: One requires a sample of the product to be submitted to a recognised laboratory (Notified Body) who conduct the suite of tests required for the product type. The results are collated and, subject to the levels falling within the CISPR limits, the manufacturer then uses this as the basis for their Declaration of Conformity. If the product fails to meet the required limits for conducted and radiated emissions, the manufacturer is required to make the necessary modifications and resubmit for testing.

For reasons beyond the scope of this website, a second route existed prior to the 2004 EMC Directive becoming enforceable. This was called the Technical Construction File (TCF). Put simply, this allowed the manufacturer to cite technical documentation as evidence of compliance. Since the documentation can be verified by persons with suitable expertise, it provided an alternative to manufacturers, who, for whatever reason, did not want to engage in physical testing and certification. Needless to say this has been chronically abused since most customs officers have no understanding of the technical documentation and most often the regulators do not become involved unless a specific complaint or allegation is made.

What are the Essential Requirements?

Irrespective of the complex law governing EMC, it can be boiled down to the EMC Directive’s "Essential Requirement", Article 5 which supersedes everything else:

"Equipment shall be so designed and manufactured, having regard to the state of the art, as to ensure that:

Article 10(1) of the EMC Directive status:

"Where a member state ascertains that apparatus bearing the CE mark does not comply with the requirements of this Directive [the "essential requirements"] it shall take all appropriate measures to withdraw the apparatus from the market, to prohibit its placing on the market or the putting into service, or to restrict its free movement thereof."

Failure to meet the essential requirements means your product is breaking the law and it should not be on the market!

What is a Declaration of Conformity?

All manufacturers are supposed to include a Declaration of Conformity with their products, either as a separate leaflet, or as part of the instruction manual. The document should declare key information, such as:

It is a formal declaration by a manufacturer (or the manufacturer's representative) that the product to which it applies meets all relevant requirements of all product safety directives applicable to that product. It is a sign that a product has been designed and constructed for compliance with relevant essential requirements, and has been through the appropriate conformity assessment processes.

A Declaration of Conformity is not a quality certificate, nor a guarantee for safety. However, when properly drawn up along with CE marking on the product, conformity of the product with the Directive(s) quoted may be presumed by suppliers in the distribution chain and by the end customer, provided there are no obvious or known defects. Additionally, market surveillance authorities, must presume that CE marked products, accompanied by a Declaration of Conformity comply with the provisions of the Directive(s) mentioned, unless they have evidence to the contrary (for example by examining or testing the product).

Of course, manufacturers can lie on a DoC and claim compliance to non-existent "standards". Comtrend offered this

Declaration of Conformity for their PG902 PLT models. This opened the floodgates for other PLT manufacturers to use anything they saw fit on their DoCs. Market surveillance authorities chose to ignore this fact, even after it was brought to their attention by UKQRM and by EMC professionals. Manufacturers are openly breaking the law and national agencies appear to be complicit in allowing them to do so!

ENs declared on the Declaration of Conformity that deal with EMC issues, such as EN55022, have a Class A test-limit and a Class B test-limit.

Equipment that meets the Class A testing limits is for office/industrial use only as they can cause radio frequency interference (RFI). A device that can only meet the class A limits, which may be used in a domestic environment, should have a clearly marked notice on its DoC that states it will cause RFI. For example:

Warning: This is a Class A product. In a domestic environment this product may cause radio interference in which case the user may be required to take adequate measures.

In the event of interference being caused, some countries have national EMC regulations which may be invoked to prohibit the user from operating the equipment and/or the manufacturer from manufacturing it. This should prohibit the use of plasma televisions in the home, as they only meet EN55022 Class A limits, and as can be seen on the plasma page, they cause considerable interference!

Equipment for domestic use must meet the requirements imposed by the Class B limits for radio frequency disturbance. These limits are much stricter to ensure the chance of RFI disturbance is, as much as possible, kept to a minimum.

In the United Kingdom, the Office of Communications (

Ofcom), is responsible for protecting the radio spectrum, policing complaints about TV programmes and, as an agent charged by the 'UK Department for Business, Innovation and Skills (

BIS)', enforcing the Electromagnetic Compatibility legislation. They are an evidence based regulator and are supposed to act to protect the UK citizens from telephone cold-calling, foul-mouthed TV/radio presenters, pirate radio stations, and blatant spectrum abuse, such as that generated by non-EMC-compliant devices. Sadly, they appear to be complicit in allowing "junk electronics" to spread un-checked, despite the weight of "evidence".

Under the terms of the Communication Act 2003(c21), Ofcom have Statutory Duties to:-

(2) The things which, by virtue of subsection (1), OFCOM are required to secure in the carrying out of their functions include, in particular, each of the following—

(a) the optimal use for wireless telegraphy of the electro-magnetic spectrum;

154. Duties of OFCOM when carrying out spectrum functions

(1) It shall be the duty of OFCOM, in carrying out their functions under the enactments relating to the management of the radio spectrum, to have regard, in particular, to—

(2) It shall also be their duty, in carrying out their functions under those enactments to have regard, in particular, to the desirability of promoting—

(a) the efficient management and use of the part of the electro-magnetic spectrum available for wireless telegraphy;

From the above snips of the Communications Act 2003, and the increasing issues of non-EMC-compliant electronics, it becomes clear that Ofcom have not been taking their responsibilities seriously!